Early in February, 2014, (last week as I write this), I had the honor of performing as Master of Ceremonies at the Annual Customer Service Banquet for the Port of Portland and PDX, our airport.

310 people from 65 companies attended; they were honoring the Customer Service Superstars nominated from each of the companies who do work at the airport – airlines, government agencies, rental car companies, parking and transportation, retail, restaurants and services. The Port of Portland has an employee group that coordinates customer service across all of the companies – treating each customer as a client of all of the companies, whether they are at that moment or not. It’s a holistic approach, and as a frequent consumer of PDX services, I can attest that it works. The airport is frequently voted the Best in America.

At the end of the event, I transformed into a referee and CSz-Portland performed our ComedySportz show, themed on customer service. It was a rocking good time, but the most important and affecting part of the night came earlier.

The Port of Portland had received an email, through Huntleigh USA, from a woman in Aurora, CO, complimenting a Huntleigh skycap, Moses San Nicolas, on his wheelchair service. Let’s read the note:

I hope you will take the time to read this letter, as one of your employees needs to be recognized for the help he provided to me and my sister, Denise, on a trip we took from Portland to San Francisco on 10/1/13. This was the hardest trip either my sister or I had ever taken, for you see, I was bringing my 52 year old sister home to California to die.  As her little sister and the nurse in the family, I had the hard task of flying from Colorado to Portland, packing my sister’s life up in a suitcase, and bringing her home, where the rest of the family was waiting. She really did not want to go, and we had to term this trip as “just a visit” to her, because she was scared and nervous about flying home, and could not handle the fact that she would not be coming back to Oregon, her home since 1984. I think that deep down she realized, though, that she needed help in the final days of Stage IV lung cancer, which she was diagnosed with back in May 2013. She was kind of being forced to give up control of her life. She was very, very sick, and could not longer walk, and was using oxygen.

We had had a bad day so far on 10/1/13, as it was an extremely stressful day what with getting her packed, getting her dressed, getting her to the car, getting to the airport. She told me many times in the car that she did not want to go, and I was feeling guilt and fear as my mission to bring her home included kind of take her choices away from her when she had been independent for so long.

I brought the rental car back to the underground garage, and the rental car people were nice enough to call me a skycap.  And into our lives, pushing a wheelchair, walked Moses San Nicolas. I realize that we could have gotten anyone, but I feel that getting Moses was the first stroke of luck Denise and I had had since I got there.  He showed up, and took immediate control.  I had no idea how he did it, but he managed to get my sister in a wheelchair, both of my sister’s suitcases, and her oxygen concentrator, from the garage into the airport. All of the sudden, a huge weight had been lifted off of me, as I had worried the whole way to the airport how I was going to manage getting everything into the airport.  More importantly, he talked to us and calmed us down.  I think that he could sense that we needed a distraction. He told us about his family, where he was from, his life.  He asked my sister and me for our names, and he talked to my sister at length about her diagnosis, where we were going, why going home for treatment was a good thing. He was the best distraction my sister and I could have asked for. He stopped to allow her to smoke, one of her favorite pastimes, and she was grateful.  He never once judged her, or told her she shouldn’t smoke.  He was an extremely calming presence for both of us.  He got our IDs, got us our boarding passes, got us through security, got us to the gate, all the while talking about everything, asking questions, maintaining calm.  He even gave my sister a badge he had with his first name on it, which Denise stuck into her purse. Denise told him that she was really nervous about going home, and then told him how much he calmed her down and make this trip seem more “okay”. He left us safely at the gate.  My sister was mad that I only tipped him $15 and not $20!

My sister died peacefully on October 14th, at home, with her family all around her. We told our whole family about how lucky we were that Moses came into our lives for a short time.  In the few days before she got very sick, we talked about writing a letter to you about Moses, and she wanted me to do it immediately, so she could sign it.  Time got the best of us, and we never did get to write the letter than I am writing to you now. After she died, I went through her purse and found the name tag that Moses had given her, and it reminded me of how he touched her life in her last few weeks. The last picture taken of my sister is in the wheelchair, in the parking garage, with Moses standing next to her. She insisted that I take it, and then would not allow any more pictures of herself after that.

I don’t know that Moses knew what impact he had on our lives that day.  Being a skycap, I am sure, cannot be easy.  Dealing with the public, I know from my 20 years as a nurse, has its’ ups and downs. But he really made a difference to me that day, and more importantly, he showed genuine kindness and compassion to my sister, and for that, I will always be grateful. He made this sad trip just a little happier for me and Denise.

I hope you will be kind enough to give him a copy of this letter, so he can know that he is appreciated by me and my family. I hope you will confirm that you received this email.  I also sent it through the website to the corporate office.

The Port flew Renee in for the banquet so that she could give Moses the additional $5. Denise’s two children, who live in the Portland area, were also there. This was a very moving event, and a terrific reminder that we usually don’t know much about other people’s struggles; meeting them where they are is important. I hope every customer service professional takes this to heart. (It would help if customers took it to heart, too.) I need to be reminded of this all the time. I hope you don’t mind me reminding you. 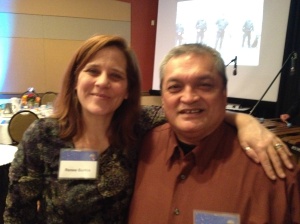 Here is a video reminder from a church in Arkansas, called “Get Service“, that reinforces the concept rather nicely. Serendipitously, this arrived in my Facebook feed from my cousin Cindy Maynard while I was writing this post. Meant to be, yes?

Patrick Short flew to DC the morning after the event and got royal treatment from Southwest Airlines and TSA employees who had been at the event. He realizes that it can’t happen every time, but it was pretty cool nonetheless. The email was reprinted with the permission of Renee Gorkin, Moses San Nicolas and the Port of Portland.